Held in Bangkok for the first time, the world’s leading leather and fashion accessories trade fair brought together over 4,000 leather mxanufacturers, distributors and consumer brands to share their ideas for the future of this exciting and ever-changing industry.

Closely following its successful debut in Dubai earlier this year, APLF further expanded its presence to the Thai capital – only its second leather fair to be held outside its usual base of Hong Kong. The Bangkok special edition was organised due to the restricted access to Hong Kong, but nevertheless attracted a strong showing, despite being organised in a much shorter time frame than a standard APLF event.

“We only decided to hold this event in June, four months ago,” said David Bondi, Director of APLF and Senior Vice President of Informa Markets Asia, at the opening ceremony in the Queen Sirikit National Convention Centre on 19th October.

There was so much interest in Asian buyers among exhibitors at APLF’s previous trade fair in Dubai, Bondi said, that APLF rushed to put on one more event before the end of the year.

Bondi went on to invite the more than 200 exhibitors at APLF ASEAN to participate in the business-matching programme and information-sharing courses.

“We expect business to happen and new contacts to be made over the next three days,” he concluded.

“This will certainly contribute to the growth of the ASEAN leather sector,” he said. One of the new features introduced at APLF ASEAN was the M.E.E.T. concept of Matching – Education – Experience – Trade Show. This was employed to ensure that both exhibitors and buyers could benefit from an enriched exhibition experience. In this way, they were able to make the most of the workshops, conferences, trend forums, and business matching meetings, in the context of this unique sourcing and business opportunity in Bangkok, at the heart of ASEAN. 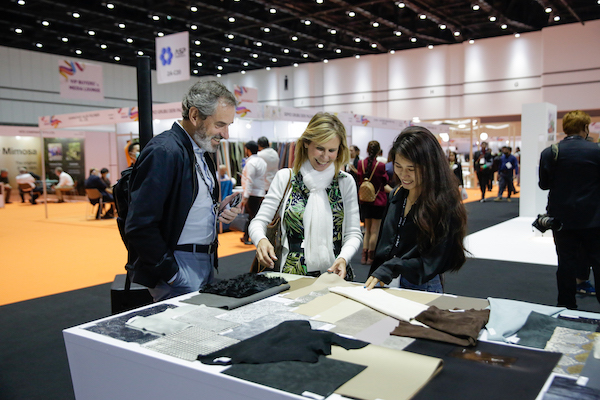 By expanding to the ASEAN region, APLF aims to open new avenues for growth among leather industry players, especially since pandemic-related measures have limited many suppliers’ business in China.

“We used to sell 50% of our production to the Asian market, mainly China. Now, of course, it’s a little tough because of the pandemic, but in general, Asia is a very good market,” said Cezar Luis Müller, director of the Brazilian tannery AP Müller.

“We are here because the Asian market is a little more open for everything. China has some capacity, but part of the production is moving to other countries in Asia, like Thailand, Vietnam, Cambodia. These countries are coming to be important producers of this kind of leather,” he added.

Facilitating these new global connections were 10 designers representing local brands from Thailand and elsewhere in the ASEAN region. These designers had their signature designs on display throughout the fair, and they participated in seminar to network and generate new leads discussing their love of leather and the inspiration behind their unique designs. Their presence at the fair not only allowed them to share their ideas and design concepts, but also to network and generate new leads.

“My inspiration comes from sustainability. We use leftover leather to make our bags. I like to make bags that are noticeable, memorable and eye-catching,” said Nannaphat Sirasitsiri, representing the Thai handbag brand Marroque.

Sustainability was a focus for all of the designers featured as APLF ASEAN, many of them favouring leather as a by-product of the meat industry over plastic materials.

“Starting in 2019, the rising trend of PU (polyurethane) materials caused a drop in demand for genuine leather goods, so it is nice to be promoting leather’s sustainability credentials and using something that already exists rather than producing something made from plastic,” said La Mitra designer Kawalee Wu.

“Leather is very sustainable because you can use it for so long. It’s durable, and it’s also biodegradable, more so than the PU materials,” she added.

Leather producers echoed this commitment to sustainability. Olivier Raynaud, representing the French lambskin producer Raynaud Jeune, said: “Sustainability is the key factor of my business. We are probably one of the only French tanneries using only renewable energy. We don’t use any fossil energy today. We recycle 95% of our waste, and we have strict sustainability procedures. This is a real demand from our customers.” Transparency in the Leather Supply Chain

This point was hammered home on the first day of the fair, when Sustainable Leather Foundation (SLF) Chairman Hans Van Haarst hosted a seminar introducing the SLF Transparency Dashboard – a searchable database showing how leather producers have passed, failed or made progress toward targets such as reducing emissions, proper disposal of waste, worker safety, and traceability.

“The idea is to make the entire supply chain for leather products visible, from farming to tanning, retanning and chemical treatments,” Van Haarst said.

“We are living in a complex economic environment,” he added. “The leather value chain is constantly under attack by man-made, vegan materials. It is important that we demonstrate to consumers transparency around what we do.”

In line with APLF’s concept of integrating a business platform, trade fairs and educational and topical conferences, seminars and workshops, APLF covers the whole leather supply chain from the raw material to the retail outlet, thus creating a completely rounded event.

Building on the momentum generated by APLF ASEAN special edition, APLF will reconvene for its next fair in Dubai from 13-15 March 2023. There are sure to be many eager, familiar faces.