With over 30 miles of barbed wire fencing to maintain on his Flint Hills cattle ranch in the US state of Kansas, owner Daniel Mushrush has an ongoing task so that he does not lose cattle and avoid injury. 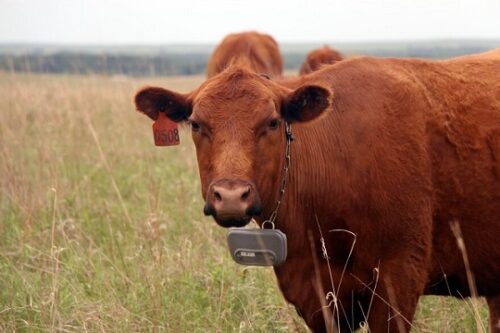 He also needs to marshall his cattle herd so that they graze if the right places and not trample vegetation and grasses that he is trying to regenerate.

Moving and re-staking traditional barbed wire fencing or even temporary fencing is an onerous task but now Daniel is installing a system that, using GPS technology creates “invisible fencing”. The system will limit cattle grazing to areas of his ranchland where he needs them to be, thus protecting recovering grassland areas and preserving wildlife habitat.

The topography of the Mushrush ranch makes physical fencing impossible to install, say along a meandering stream. However, the GPS system can set up virtual fencing, anywhere, at any time.

A map of the 15,000-acre ranch is drawn up on an electronic tablet and lines can be set on the map to prevent cattle penetrating areas in recovery from grazing. The GPS collars worn around the animals’ neck are tuned into the virtual fence signal. If an animal approaches the virtual, invisible fence, a sound is emitted from the device; upon getting nearer the sound is amplified and when about to cross the virtual boundary, the animal receives an electric shock which should dissuade it from crossing over to where the grass is greener.

With between 800 to 2000 head of cattle on the ranch depending on the season, there are many animals to supervise. But once equipped with collars with GPS devices, the task of controlling their movements becomes easier.

The University of Colorado is monitoring the Mushrush ranch’s experience with the GPS system. The university will also evaluate the perceived benefits for regenerative farming, wildlife habitat and the longer-term cost-savings Daniel Mushrush expects to gain by using GPS virtual fencing technology.