Italy’s national association of leather chemists, AICC, led an industry delegation to a private meeting with Pope Francis at The Vatican on January 29, reports Leatherbiz. 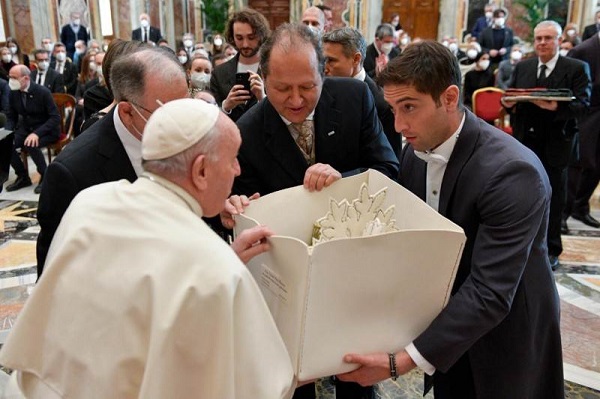 AICC president Roberto Mariano Mecenero (partly hidden) and its senior representative in the Tuscan leather cluster, Paolo Testi (centre), hand over a representation in leather of the Tree of Life, to Pope Francis and a Vatican official.

Dr Mecenero presented the work of AICC to Pope Francis, emphasising member companies’ commitment to environmental responsibility and highlighting the role it is playing in organising the IULTCS EuroCongress, which will take place in Vicenza in September. He asked the pope to accept a donation of money to help the needy and a series of gifts made from leather. These included a briefcase in white leather for the pope to use on his travels and a representation, also in white leather, of the Tree of Life.

In an address that Pope Francis made in response, he said he was happy to spend time with the group from AICC and other leather industry organisations for a number of reasons. “Yours is a very specific area of work,” the pope said, “and you make an original and distinctive contribution to wider society. Your profession involves applying scientific and technical knowledge to an artisan activity. It’s an activity with ancient traditions, in Italy and elsewhere, including in my home country, Argentina.”

He pointed out to the group that, in his youth, he had studied to be a chemistry technician at the Hipólito Yrigoyen technical school in Buenos Aires and, on qualifying, worked for a short time in the 1950s in a laboratory run by a firm called Hickethier-Bachmann in the Argentinean capital, specialising in food hygiene analysis. He said he knew he wasn’t at the level of the AICC delegates, but had at least gone a little bit of the way down their chosen career path.

The pope said he hoped AICC member companies would be successful in recruiting new-generation leather chemists, but he said the knowledge and experience of older workers was important too. “Bring the old and the young together,” he said. “That’s the key. I can well imagine young people becoming passionate about an original industry sector like yours, but they will need the support of ‘old hands’ who have so much that they can pass on, at a technical and at a human level.”

He praised the collective efforts of leather chemicals manufacturers and others in the industry to achieve a lower environmental impact. “This is a critical point,” he said, “and it’s something I know you care about deeply. You, too, are making your contribution to the care of our common home.” He encouraged member companies to continue their work to lower the impact of their products and processes, even if that work often goes unnoticed.

“Your chemicals are used to treat hides that go on to be made into bags, shoes and so many other things that we all use every day, without thinking about all the work that goes into making them,” Pope Francis said.