The Sustainable Leather Forum went ahead in Paris on September 13. This year’s forum is the third that France’s Conseil National du Cuir has run, reports Leatherbiz. 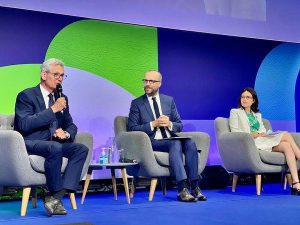 In an opening keynote address, Hélène Valade, environment director at luxury group LVMH, said that manufacturers need to “reinvent themselves to create a circular economy model”. She added that the ‘extract, manufacture, throw away’ production model was no longer viable.