Fashion Access 2017: catering for all, from Millennials to Silvers

Located on the third floor of the Hong Kong Convention and Exhibition Centre, Fashion Access, the concomitant fair of APLF attracted almost 20 per cent more visitors this year compared with 2016. Close to 10,000 visitors attended the three day event (from 29 to 31 March, 2017) to the great satisfaction of the more than 262 exhibitors, including 87 first time ones.

Among them, former visitor Jayant Malhotra of AEE Overseas from India, has taken the plunge this year and decided to exhibit the company’s new line of “Members only” accessories. “I have sourced leather at the APLF before and I think Fashion Access complements it well, which is why I chose to exhibit this time. We are interested in bulk factory orders for our newly designed line of men’s leather accessories,” explained Malhotra.

Multiple times Korean visitor, Kim Chang Hwan, also took the plunge and chose Fashion Access to showcase products from the newly launched brand Euletraum. “We are looking for partnerships and for brands who would like to incorporate our products,” said Kim, adding that they had been approached by several Chinese companies.

In focus this year were the athleisure and sports fashion, a trend that continues to gain strength not only amongst worldwide youth but also amongst the Silvers, a growing population in many countries and an increasing contributor to the global economy. 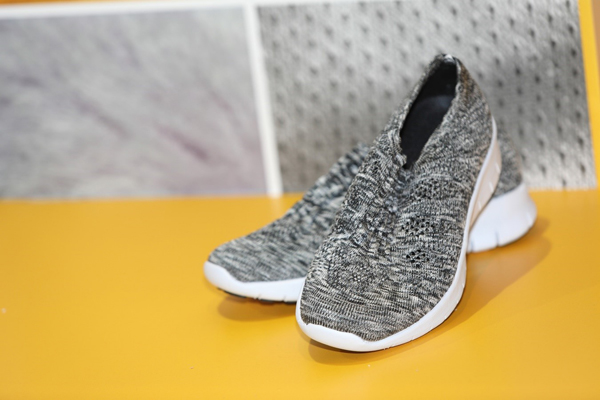 According to a 2015 report by the United Nations Department of Economic and Social Affairs about the World Population Prospects, by 2030, 12 per cent of the world population will be over 65. In China, the elderly will account for 300 million people in 2025, according to a study published by the Xinhua Chinese press agency. One of the characteristics of the Silvers market is that they are wealthier than other generations and have higher spending power. According to a report by the Bank of America Merrill Lynch called The Silver Dollar, it is estimated that the over-50s account for almost 60 per cent of total US consumer spending and 50 per cent in the UK. They can afford more hobbies, interests and leisure traveling which in turn creates more demand for athleisure footwear.

Interestingly, their taste for comfort, good value and unique style are often similar to Millennials as have noticed several brands, including Alice Martha. “Our trendy , colourful handbags were originally designed for young women, but our data shows that many women in their 70’s buy them!” noticed the brand’s International Department Manager Ivy Ko. The aging population is one of the reasons behind the large presence of the Japanese pavilion which hosted no less than 16 exhibitors of finished products this year. According to Hiroyuki Matsuzuki of the Japan Leather and Leather goods Industries Association (JLIA), because of the dwindling Japanese population, Japanese tanners, manufacturers and brands can no longer rely on the domestic market and need to look for new ones. Japan’s 2015 official census shows that the country’s population had shrunk by almost 1 million people in five years. Nearly a third of all Japanese citizens were older than 65 in 2015; Research from the National Institute of Population and Social Securities Research suggests that number will rise to 40 percent by 2050.

“There is a lot to overcome for Japanese companies to enter international markets, the language barrier being only one of them,” explained Matsuzuki. Japan’s small firms, many of which are family run operations struggle to sell their products overseas. The JLIA provides a platform for all these small and young brands. One of the conditions companies need to fulfill in order to benefit from the JLIA assistance is that their products have to be made in Japan from preferably locally sourced material and components. Fulfilling these requirements was the company Jay & Jay: founded in 2015 in the Nagata district of Kobe, the company manufactures shoes with interchangeable tops. Soles are made from PU, jute or rubber while tops are either made of leather, cotton or denim and can be inter-changed by a simple zip. Most of the materials are sourced in Japan, according to the company’s young CEO, who goes by the company’s eponymous name of Jay Jay. Uncovering and supporting young creatives has always been one of the main purposes of Fashion Access. To this aim, this year Fashion Access featured two new sections: Design Street, made up of new and up-and-coming fashion brands primarily from Asia, and Fashion Avenue, a section dedicated to brands from all over the world. The star of Design Street was definitely Alice Martha, a young Korean brand of women handbags founded in 2014. The company was awarded the Best of APLF Awards for its surprisingly chic collection of PU handbags, with compact, minimalist silhouettes and elegant lines, and impactful colors.

Among the 40 international brands featured in Fashion Avenue was the Sino-Italian company Daniela Moda which prides itself for making products exclusively with genuine leather; APLF Award nominate Korean company, Flink; and the American company BravoHandbags whose unique enamel coated technology, paired with RFID proof technology ensure that Bravo handbags will look like new for a life time while protecting their users from potential identity theft, according to the company’s president, Terry Smith.

The next edition of Fashion Access will be held together with APLF and with a renewed edition of Cashmere World from 14 – 16 March 2018. For more information, please visit www.fashionaccess.aplf.com.